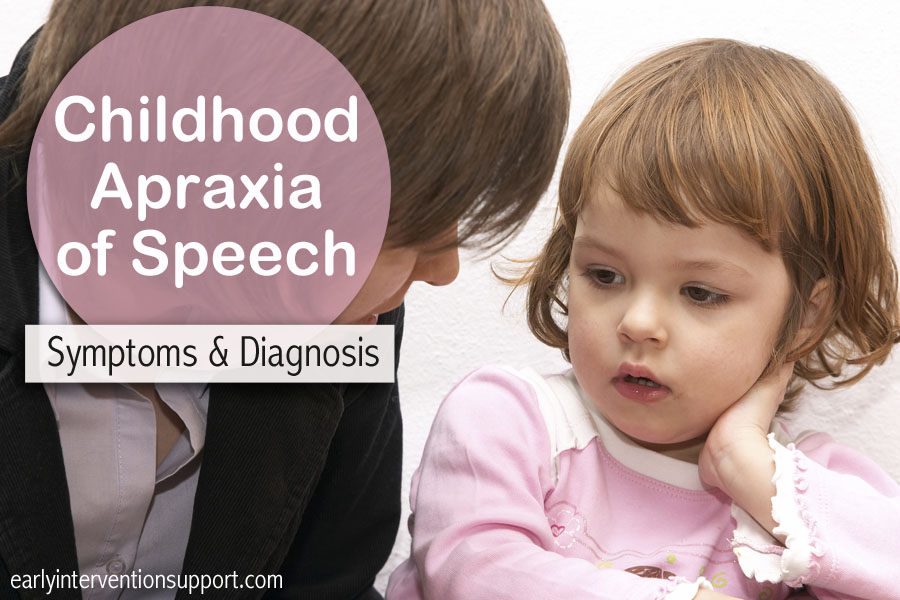 CAS is a motor speech disorder.  A child who has CAS will have difficulty planning motor movements for speech production.  So, what does this mean?  A child with CAS will often know what they want to say, but when they go to say a word, the word that was in their brain gets lost before it gets to the mouth and throat to produce the word.  This results in the word not coming out at all, or not coming out correctly.  At this time, it is estimated that 1-10 of every 1,000 children have CAS.

There are many characteristics of CAS, and not all characteristics are listed here.  The characteristics listed are often seen in the 0-3 population (children may have some of these characteristics).  In general, children who have CAS were often quiet as babies, and did not babble a lot.  They do not frequently add new words to their vocabulary.  They have difficulty imitating words and sounds.  It may look like they are trying to say a word and it is not coming out.  They may not be able to say a lot of different vowels or consonants.  They often will use a lot of gestures rather than words to communicate.  Sometimes, children who have a speech or language delay may exhibit these characteristics also.  It can be difficult to determine at a young age if a child has a severe speech or language delay or CAS.

A speech language pathologist can evaluate a child if she is showing signs and symptoms of CAS and can also give a diagnosis of CAS.  Young children (0-3) usually do not get a diagnosis because they are not yet talking and cannot participate in the speaking tasks required in a formal evaluation.  When a child begins to talk, and can participate in a formal evaluation, a more accurate diagnosis can be given.

Every child with CAS is different, and the prognosis is difficult to predict.  However, with appropriate treatment and family support, a child with CAS can reach their full potential.

A great resource for parents is www.apraxia-kids.org.  This website provides a great deal of information on this subject.