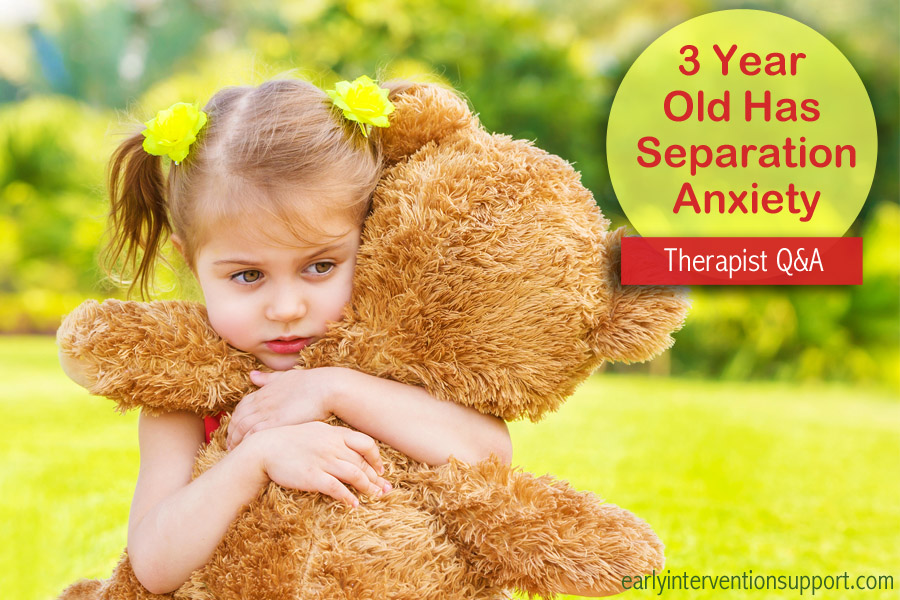 My daughter recently turned 3. She still nurses and sleeps in our bed, which is fine with me. I am worried about her separation anxiety. It started around 10 months and got worse until about 13 months (she would scream as I took 2 min. showers while her dad hugged her on the other side of the glass). At 17 months she was showing some improvement and I started taking her to playgroup. She took a few weeks, but reached a point where she didn’t care if I left the room to go to the bathroom. At 20 months we moved to the U.S. She then had another peak in stranger anxiety and also would not let me pee in our own bathroom without sitting on my lap. She would even scream if I walked more than a yard away. I have been taking her to a toddler gym class for 1 year now. For the first 5 months she would not participate and buried her head in my lap or breastfed. After that she developed trust and I even once left the room for 15 mins. Then a month ago, after going to gym class for over a year, I took her to a preschool summer camp (3 hours, Mon., Wed., Fri.). The other mothers left, but the organizers allowed me to stay. My daughter relentlessly begged me not to leave even though I told her I had no plans to. She would not do anything without holding me. She also reverted to not participating at her gym class. Now a month later she is still not participating at gym and I worry it will be another 5 months before she does.  I am very concerned that I will have to home school. I think she would miss out on a lot that way.

She used sign language from 6 months, was speaking in complete sentences at 18 months and could read phonetic words at 2 1/2. I can’t see any developmental delays at all other than separation anxiety. All of her learning is directed by what she wants. I encourage her not to attempt too much. She has a string tendancy to demand to try reading, doing puzzles etc designed for much older children, then if she fails she feels humiliated and won’t even look at me. I try to console her, but she really can’t stand failure, even if I tell her the puzzle is for a 7 year old.  This further worries me that she will be a miserable perfectionist.

What should I do?

This is a tough one. I have not read evidence that breast feeding after age three or co-sleeping causes any type of separation anxiety in children. It does create an attachment and strong bond and since your child has had difficulty with separation all along, perhaps the letting go is more difficult for her? I would say that since you have opted to stay when she has cried or had a tantrum in the past that she now has a learned behavior where all she has to do is cry or bury her head in your lap in order to get you to stay. Since she is already 3 and very bright, she is apt to keep this up because of course she doesn’t want you to leave – no child WANTS their mom to leave them.

It’s great that you have given her experiences outside the home to try to integrate her into a group with your absence, but without you leaving the room consistently, she seems to have learned that her behavior will make you stay – so she is getting her way. All children go through separation anxiety and sometimes at several times, such as a move to a new place or a transition to a new classroom. At three it is still natural for her to have some separation anxiety, but is not typical if she cries for more than 15 minutes after you leave or does not get settled into a new routine after a month. I think it’s not going to be easy, but the best way to help her through this is to go cold turkey so to speak and keep the same routine, say goodbye and leave. Do not return until class is over. This will be hard. Hard on you and on her, but maybe harder on you. She may cry for an entire hour for the first few weeks, she may refuse to participate, but to change a behavior things always get worse before they get better. I have worked with kids who resorted to vomiting when their mom’s left toddler class, because that would get them sent home, but after handing the child a paper bag and saying “if you need to throw up, do it in here” but not allowing the child to leave, after 3 weeks the separation was worked through (not that it was pleasant for anyone).

If you have extreme concerns about her anxiety levels, I’d advise consulting a child psychologist or developmental pediatrician. I would also advise using a digital camera and taking pictures of her daily routine on the days she goes to one of her groups & needs to separate. It helps kids to think in pictures. So placing pictures in a photo album and reading it daily as a story, showing “we eat breakfast”, “We get in the car”, “We go to swim class”, “Mommy says goodbye at the door and will be back when you are done having fun swimming”, “Mommy comes back”…and perhaps when things go well, build in an incentive or reward “we go to the bookstore and you pick a new book if you have fun at swim class without crying” or “we go for ice cream” etc. The key with separation is showing the child YOU are OK with leaving, if YOU are not ok with leaving, she will sense this and will be more apprehensive. So, even if you are apprehensive (and you will be), you need to put on your brave face, say goodbye, mean it, leave and not return until class is done, no matter what-consistently. Consistency across all situations is the key to changing a behavior. Then when you return you make a HUGE production of your return and reinforce that although you need to leave her at times, you ALWAYS come back. You can also search Amazon.com for preschool book titles on separation to read at home. Here is a link from our website: http://www.earlyinterventionsupport.com/helping-child-separation-anxiety/