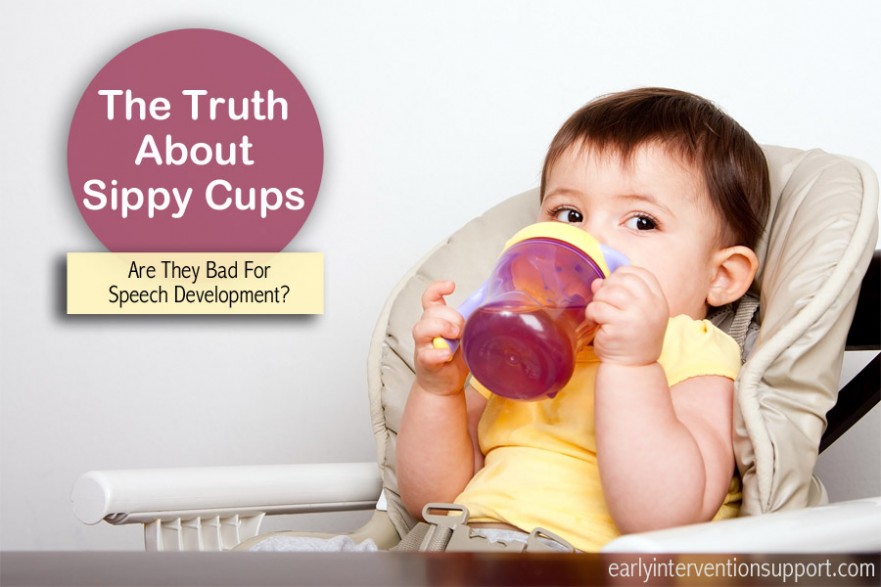 A common question parents ask me is, “I hear sippy cups aren’t good for my child’s speech development. Can you tell me why?” The answer may not be what you think! Here are the common concerns regarding sippy cups:

When a child drinks from a sippy cup vs. an open cup vs. a straw cup, what they do with the muscles of their mouth varies. A sippy cup is the same swallowing pattern as a bottle. An open cup and straw cup require more movement and control from the lips, cheeks, tongue and jaw. When drinking from an open cup or straw, the tip of the tongue elevates behind the top teeth to push the liquid back to swallow. When drinking from a sippy cup, the spout is in the way, impeding the tip of the tongue from elevating. This creates an abnormal swallowing pattern, rather than a correct one (Bahr, 2010).

When a toddler is drinking from a sippy cup, it is immersing the front teeth in the liquid. Even if a child isn’t drinking sweetened drinks, milk and juice still contain some sugar. Children that drink sugary drinks out of sippy cups throughout the day have a higher risk of developing tooth decay (Dyer, 2004).

So, what does this mean for a parent who wonders if a sippy cup is impeding their child’s oral motor development? My suggestion is to limit the use of the sippy cup or completely eliminate it.

Can your child drink from a straw? There are some great options for spill-proof straw cups that are available at department stores. Can your child drink from an open cup? Encourage the use of open cup drinking during mealtimes. Give your child a little bit of liquid in a Dixie cup – this is a great size for children to practice on. Place small Dixie cups by the sink to drink water from before teeth brushing or at bath time (spills are ok in the tub!).

Bahr, D (2010). Nobody Ever Told Me (or My Mother) That! Everything from Bottles and Breathing to Healthy Speech Development. Arlington: Sensory World.