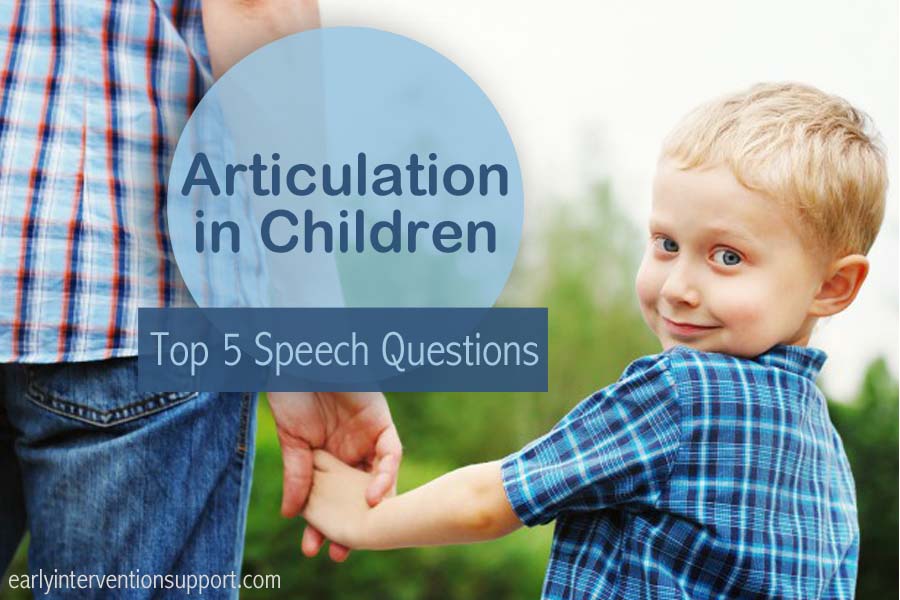 What is articulation in children?

When should I be concerned about my child’s articulation?

As therapists we typically are not concerned with a child’s articulation until they reach the age of 3. Under age 3 we expect children to make quite a few articulation errors and substitutions and to be frustrated when they are not understood. By age 3 a child should be using at least 200 words, using 3-5 word phrases and be understood at least 80% of the time. By age 4 a child should be 100% intelligible even if they continue to have some articulation errors. If you are concerned about your child’s articulation or intelligibility (how well you or others understand his/her speech) you should have him/her seen by a licensed speech pathologist to rule out any early concerns or delays.

What sounds do children learn to produce first and in what order?

Most children are able to produce the bilabial sounds (made with the lips) of “b, p, m, w” first since these are sounds are visible on the lips. They may also produce sounds such as “d, n, t” early on as well. These sounds are called lingu-alveolar since they are produced with the tongue behind the teeth against the alveolar ridge in the mouth. The acquisition of new sounds is a developmental sequence for young children, but by the age of 8 all children should have a mastery of all speech sounds. So keep in mind that some children will continue to work on mastery of the more difficult sounds such as “r” and “s”, as well as some blends like “sh” or “ch” until around 3rd grade. In other words, if your 2 year old is not yet using the ‘k” sound or ‘r” sound correctly yet there is no need for concern.

What interferes with articulation?

Children who have had multiple ear infections may be at risk for articulation problems since having excess fluid in their ears is like listening under water or in other words, sounds are muffled to some degree. Even after getting tubes, children may still experience articulation errors since they may continue to pronounce sounds as they heard/learned them when they were experiencing a conductive hearing loss due to the ear infections.

Children who have a specific diagnosis, such as cerebral palsy or Down syndrome or who have abnormalities of the face, oral cavity or jaw would also be more prone to articulation problems.

How do you treat an articulation disorder?

Articulation treatment is provided by a licensed speech pathologist and may involve demonstrating how to produce a sound correctly, learning to recognize which sounds are correct and incorrect, and practicing sounds in different words. For young children this is all done through fun and play during natural daily routines.