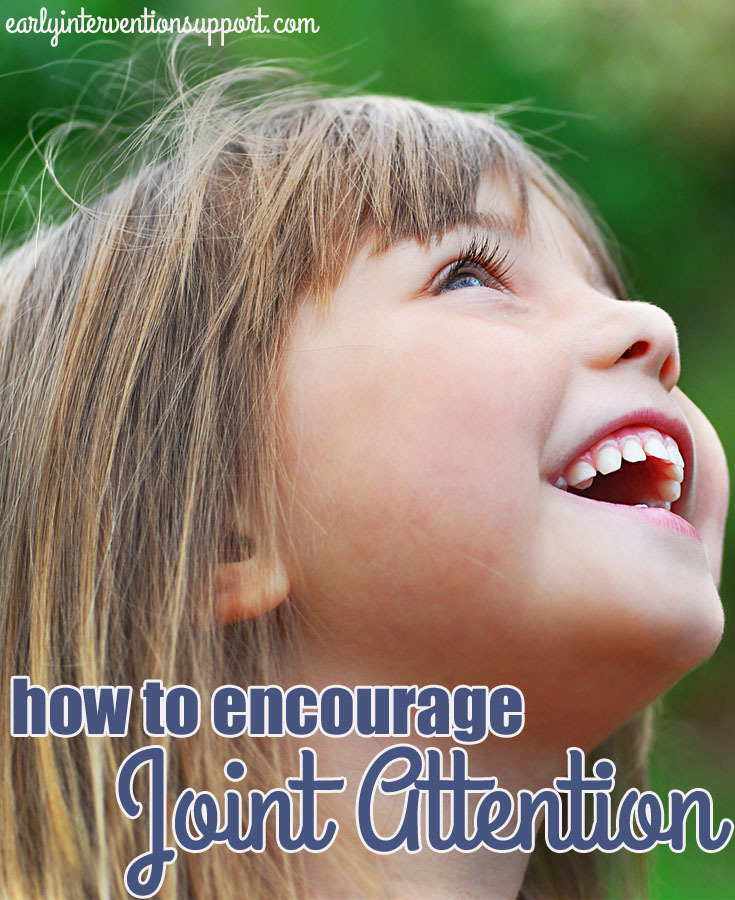 An airplane flies overhead. Your toddler looks up into the sky with large eyes, looks quickly to you, then looks back toward the sky. It takes no words, no description, occasionally a gasp or squeal will sneak out, but the language is not the piece driving this interaction. Your child just used a method of communication known as joint attention.  Without language, your child has just communicated to you “Look! I see an airplane! Do you see it too?” If we are quick enough to catch our child’s excitement, we often will respond with “Did you see an airplane?” or another response of recognition. This teaches our children first, that this object is called an airplane, and second, that we want to interact or communicate with them about their surroundings.

Joint attention is one of the first pieces of social communication to develop in children, beginning as early as six months of age. Joint attention can be broken down into three attributes in connection with learning to communicate. The first is learning to share attention to an object, noise, or person, as described in the previous airplane example.  The second is learning to share affect. This is described as the child and caregiver demonstrating similar responses to play such as smiling, laughing, and startling. The final attribute of sharing intentions surrounds the use of words or gestures to communicate something to the caregiver that the child wants (Charman & Stone, 2008). Until these three methods of communication are recognized and utilized by infants, more complex communication skills are nearly impossible to learn. These are the building blocks for interactions and how children learn to speak with others.

As children grow and begin to meet these social milestones, it is important to discern their ability to respond to others acts of joint attention such as following eye gaze (as early as six months) and following gestures such as pointing (emerging between nine and twelve months). Once these skills have been acquired, we look for children to begin to initiate on their own by tracking others in their environment and beginning to reach and point to preferred items. These skills demonstrate the initiation of expressive and receptive language skills.

What can I do if my child does not show beginning signs of joint attention?

To better help your child attend to objects in his or her environment with you, use higher levels of what we call prompting. For instance, use touch to get your child’s attention, or if necessary, try turning your child’s body to face the object you are trying to discuss. As with most interventions, we need to find a method that is specific to each child in terms of effectiveness and reinforcement. Let’s rewind back to the airplane example. Get on your child’s level, turn him or her in the direction of the airplane and slowly move your finger from near to far, pointing at the airplane, while labeling, “look at the airplane!!” This pairs prompting (touch and gestures) with a label to encourage a joint interaction. With repetition, the interactions will increase and eventually be reciprocated.