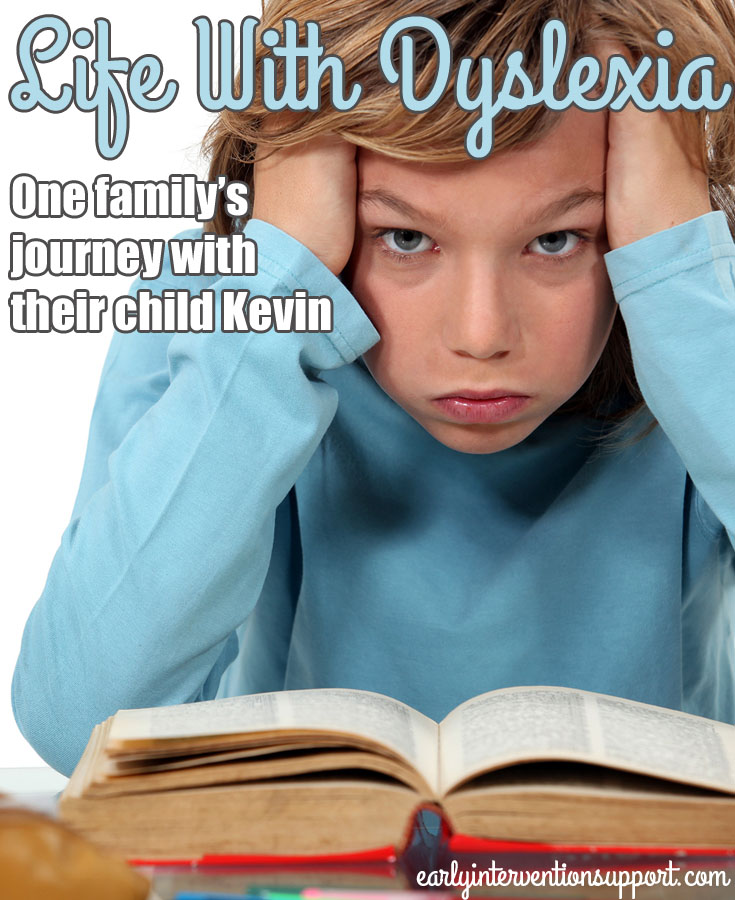 The International Dyslexia Association defines dyslexia as a neurologically based, (often familial) disorder which interferes with acquiring and processing language.

It can have varying degrees of severity.  A child who is dyslexic may show one or more of the following difficulties: understanding language, speaking, reading, writing, and spelling.

Dyslexia is not the result of lack of motivation or lack of proper instruction.

Although dyslexia can affect a person over a lifetime, with appropriate intervention, individuals are able to overcome the challenges it poses.

For more information about the characteristics of dyslexia, visit the Bright Solutions for Dyslexia website or our article about the signs of dyslexia in children.

The following account describes one family’s journey with their child, who was eventually diagnosed with dyslexia, received intervention, and is now successfully navigating college as a junior in Mechanical Engineering.

Kevin’s family noted that as a toddler, he was slower to talk than his older brother.  When he finally did start to talk, he spoke very well for his age.  He was slow to learn the alphabet, days of the week, and months of the year.  He had odd dressing habits, such as putting clothes on backwards, or wearing unmatched socks.

In preschool and kindergarten they noticed that he wrote his letters and numbers backwards and demonstrated “mirror image” writing at times.  They also noted that he was slow to learn to tie his shoes.

In first and second grade, Kevin experienced difficulty with learning to read.  Sight words were especially difficult, even basic words such as “it” and “at.”  The books he could read from a word attack standpoint were “baby books” and the content was far below his intellectual ability.  He struggled with spelling tests.  They were beginning to note, however, that he was exceptionally good at math.

Kevin began to have behavioral problems, which stemmed from frustration.  He found ways to avoid having to read out loud due to embarrassment.  He refused to cooperate with homework as well as tutoring.  His teacher considered him a “behavior problem.”  Formal testing was put off in kindergarten and first grade because he would not cooperate. It was feared that the results would not accurately reflect his abilities and the recommended course of action would be inappropriate.

Kevin’s 2nd grade teacher recognized that he had a “true learning disability.”  She told them, “He’s so smart, but something is blocking him.”  Formal testing in 2nd grade resulted in a diagnosis of learning disability in Reading – specifically in Word Attack.  Testing in Philadelphia at Lindamood-Bell clinic resulted in an unofficial diagnosis of “Dyslexia.”  At this point, Kevin’s mom received training and began teaching the Lindamood-Bell system with Kevin over the summer.

Finally, in 3rd grade, an IEP was developed for Kevin, and he began to receive services to help with Reading in the Learning Support Classroom.  This was supplemented by ongoing support of his family for homework.  Although Kevin continued to struggle with reading, he also continued to excel at math.  He was able to carry out multistep math calculations in his head.

Kevin continued to use the Learning Support Classroom through Elementary school, but refused to participate in Learning Support in Middle School.  He did not want to be singled out or “different.”  Kevin continued to have an IEP (individual education plan) through middle school and high school.  Because of the IEP, his teachers were aware that he continued to have some struggles with writing and spelling, and could adjust their expectations accordingly.  For example, in a science class or a social studies class, the teacher could focus on the content in his written work, with less critique of any spelling errors.

You can use the following link to view an English assignment that Kevin wrote as a high school senior entitled “Two Teachers That Changed My Life.”  He describes his journey with dyslexia and the teachers who helped him believe in his abilities.  He explains the initial frustration at not understanding the symbols for reading, the embarrassment of not being able to decode these symbols and read as well as his classmates, and how these feelings affected his confidence and self esteem.

Kevin is now a junior in college.  He has learned coping strategies for his dyslexia, but the spelling struggles are still there. He has, however, transformed from a child with low self-esteem who had hated school and could not read simple words, to a confident young man who enjoys learning and is well on his way to a career of his choosing.  He was able to learn to decode written language to read and write with success.

The secret to Kevin’s success is a combination of specialized learning techniques and a family driven effort to boost his self-esteem.  They faced constant, “Why am I so dumb?” questions, and in return they provided never-ending “I believe in you” messages.  His parents worried about his lack of self-confidence, and came up with creative ways to help him to feel good about other aspects of his personality and abilities.  Confidence builders included Cub Scouts and Boy Scouts, sports (scuba diving, baseball, soccer), art classes, and unique reward systems (this is how he became the proud caretaker of a Chinchilla!).  His family wanted him to learn that, “When you believe in yourself, then there will be nothing stopping you.”  Kevin now believes in himself!