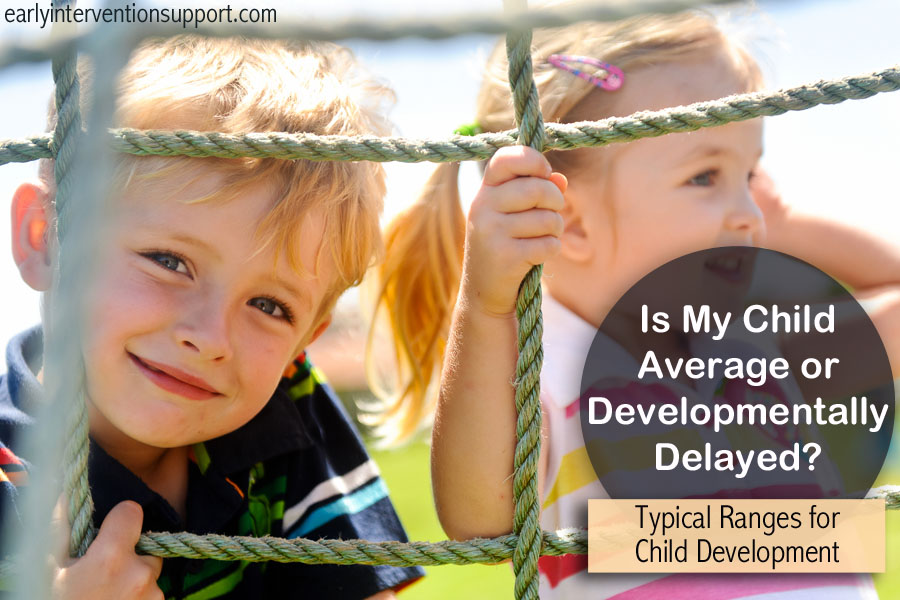 As a therapist, I often hear parents make statements such as “He walked really late, at age 14 months,” or “Her sister was so much farther ahead of her, she was talking in sentences by 18 months.”  It’s natural for parents to compare their child with other children, as well as with older siblings, but is it a good thing? Probably not. The only person you should be comparing your child to is himself. All children develop and progress at different rates. And guess what? Most are doing it in a typical developmental fashion. But, be aware that not all children achieve a skill at the exact same time, and that’s okay. This does not mean they are behind or atypical. For example, many parents have heard that “Babies sit at 6 months, crawl at 9 months, and walk and talk at 12 months.” If their child is not doing these things at those exact ages or a bit earlier, they begin to worry that their child may be behind.

What many parents fail to realize is that there is a huge range of typical skill development. While many babies walk at 12 months, some walk at 9 months and some walk at 18 months and (surprise), they are all still typically developing! This should be good news for most parents. The range of average applies to all child development areas (language, motor skills, social skills, self-help skills, play skills). So while your neighbor’s son is 18 months old and is saying 30+ single words and your son is 19 months and saying 10 words, they are both “typical.”

There is also a difference between the terms “average age” and “typical range.” Average age simply means that if we looked at 100 babies and what age they were when they began to walk and then we divided it by 100, we’d get an average age of when these babies walked.  That is a statistic. What is more important is the range of typical development, which refers to the entire range of when this skill can appear for it to be considered typical. When a skill is completed outside that range, then it is considered atypical. So for instance, Maggie babbles and said her first word at age 8 months, and Jimmy babbles and said his first word at 14 months; they are both within the typical range for saying their first word. Claire is 20 months and babbles, but has not yet said her first word; her mom is making a referral to early intervention for a speech evaluation.

Face it: we live in a competitive world and many parents do not want their child to appear to be behind his peers, even as an infant. But bear in mind that just because your neighbor’s baby crawled at 7 months and your baby crawled at 10 month, this does not mean that your baby will walk later than your neighbor’s baby. Basically, the ranges of typical development have no predictive value. But, a friend who says “What? Tommy’s not crawling and he’s 10 months old? My Billy is already pulling to stand, are you sure there’s nothing wrong with Tommy?” sure can make a parent feel apprehensive.

So, how do I know what IS atypical?

Let’s break it down in terms of two year olds:

Speech and Language: Mara and Jessica are both 24 months old. Mara has a vocabulary of well over 50 words, while Jessica has a vocabulary of 22 words. Both girls imitate new words and use a combination of gestures and words to communicate their wants and needs. Mara has started to use two word phrases such as “more juice” and “Daddy go,” while Jessica uses only single words such as “cup” and “go.” Both girls have typical speech for two year olds.

Gross Motor Skills: Jessica walks, runs, climbs the ladder to the slide on her own, goes up & down stairs holding the rail, can kick a ball and is starting to catch a ball thrown to her. Mara walks, runs, goes on stairs holding her mom’s hand, but is wary of climbing at the playground and cannot yet catch a ball or throw very well with direction to an adult. Both girls have typical gross motor development for two year olds.

Fine Motor Skills: Jessica can stack 12 cubes, string beads on a shoestring, holds a crayon with a mature grasp and imitates circular scribble, horizontal and vertical lines on paper. Mara stacks about 6 cubes before they fall down and cannot yet string beads without some help from her mom. She imitates circular scribble on paper and holds the paper steady with her opposite hand while coloring, but still uses a fisted grasp on her crayon. Both girls have typical fine motor development for two year olds.

Social/Emotional Skills: Mara is very social and attends child care 5 days per week. She interacts with adults and peers using a combination of gestures and words and she imitates peers in play. Mara separates well from her mother at child care and does not cry when her mom leaves. Jessica does not attend child care. She is sometimes overwhelmed by large groups of children, but does well on her play dates with Mara. She interacts with Mara primarily using gestures, and is often content to play alongside Mara without interacting with her unless they are both fighting over possession of the same toy. Jessica often cries for about 10 minutes if her mom leaves her sight or if she needs to stay with grandma while mom goes shopping. Both girls have typical social/emotional development for two year olds.

Feeding Skills: Jessica uses a spoon and fork at meals and can drink from a straw cup and a small open cup with minimal spilling. She is described as a good eater who tries any new foods her family presents to her. Mara uses a spoon at meals, but will still use her fingers at times because it’s “easier.” She drinks from a sipper cup and a straw cups and has not mastered drinking from an open cup without spilling yet. She is described as a “picky” eater by her family who goes through stages of eating certain foods such as macaroni and cheese or chicken nuggets and refuses to try new foods until they are presented several times to her. Both girls have typical feeding skills for two year olds.

Toilet Training: Mara has been toilet trained since age 23 months. She tells her mom 98% of the time when she needs to use the potty and often stays dry at night. Jessica is not showing any interest in potty training although her mom has tried to sit her on the potty a few times, she has not gone yet. Jessica still wakes up wet after naps and does not show discomfort in a wet/soiled diaper yet. Both girls have typical toileting skills for a two year old.

So how do I know if my child is falling behind or may need early intervention services?

As previously stated, try to use ranges of typical development to decide if your child may need help in a certain area of development. If your child is heading to the later side of the range or is past that range for a skill you may wish to seek a referral for an evaluation. Use websites such as Early Intervention Support as a guideline for developmental milestones. Try not to compare your child with older siblings, neighbors, or cousins. Discuss your child’s development in specific areas with your pediatrician and ask if a referral for an early intervention evaluation may be helpful. If you are concerned, don’t wait! In EI, we would much rather assess a child and determine that he is showing age appropriate skills and does not need our services, rather than take a wait and see approach. YOU know YOUR child best, so trust your own intuition!